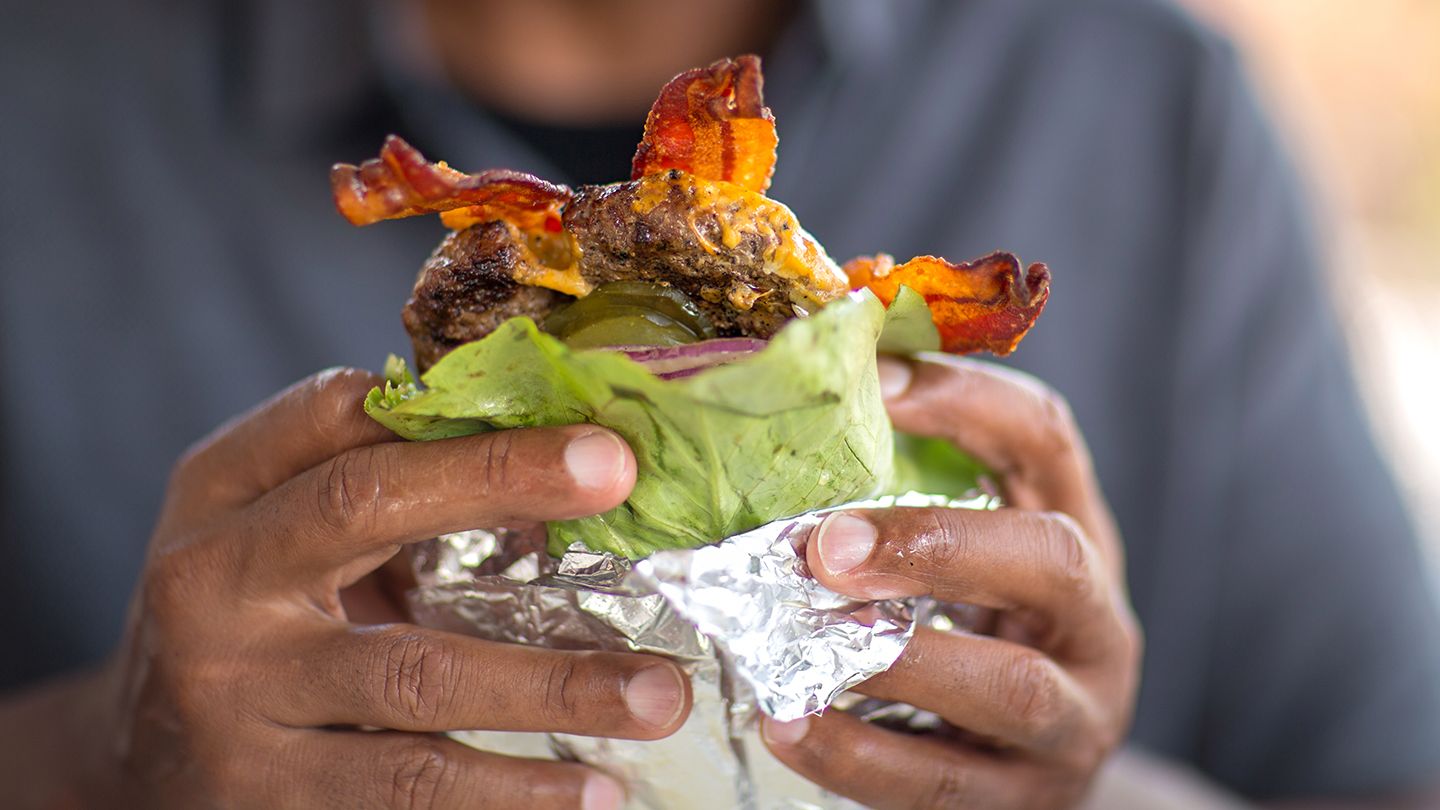 Overweight, low-testosterone men may benefit from following a very low-calorie ketogenic diet, a small preliminary study suggests. Researchers presented their findings this month at the European Endocrinology Congress after studying the effects of a very low-carb, high-fat diet on 17 middle-aged, obese men.

Study participants lost a substantial amount of weight, helped reduce their body fat percentage, and increased their testosterone levels. “The low-calorie keto diet represents a therapeutic nutritional intervention to treat obesity with a large effect on weight loss and, consequently, on testosterone levels,” says one of the study’s authors, Angelo Cignarelli, MD, PhD, from the section of Internal Medicine, Endocrinology, Andrology and Metabolic Diseases at the University of Bari Aldo Moro in Italy.

The Keto diet can provide weight loss and low T-benefits

On average, the men in the study were 41 years old and had a body mass index (BMI) of 36.4, which indicates obesity. They started the study with average total testosterone levels of 2.5 nanograms per milliliter (ng / ml), at the lower end of what is considered normal for an adult male, and had levels of so-called globulin. which binds sex hormones (SHBG), a protein that transports testosterone to the blood, which were in the normal range of 24.2 nanomoles per liter (nmol / L).

All men followed a keto diet and did not consume more than 800 calories a day for four weeks. At the end of the study period, men lost an average of 9.3 kilograms (20.5 pounds), reducing their BMI by an average of 3.1 points.

Although men were still obese according to their BMI at the end of the study period, they lost an average of 6.5 kilograms (14.3 pounds) in fat mass. They also experienced mean increases of 0.89 ng / mL in total testosterone levels and 10.94 nmol / L in SHBG after four weeks with the low-calorie ketogenic diet.

Four out of five men in the study started with testosterone levels low enough to be diagnosed with hypogonadism, Dr. Cignarelli adds. According to the Mayo Clinic, obesity can be one of many different potential causes of hypogonadism, a condition that can lead to symptoms such as low sexual desire, fatigue, depression, and erectile dysfunction in men.

While a keto diet may be able to help treat hypogonadism, the study was not designed to prove it, and more research is needed to determine if this approach can work, Cignarelli says. Any benefits should also be weighed against the possible side effects of a keto diet, which may include the potential for muscle mass loss or vitamin and mineral deficiencies, Cignarelli notes.

The study did not assess whether men had sexual dysfunction or whether they experienced an increase in sexual desire or an improvement in sexual function when they followed a ketogenic diet and their testosterone levels increased. Nor did he examine whether men had other symptoms of hypogonadism.

Testosterone therapy can help improve the symptoms of hypogonadism, such as sexual dysfunction, depression, difficulty concentrating, decreased muscle mass, and increased body fat, according to the Mayo Clinic. But testosterone will not have this effect for healthy men who do not have a diagnosis of hypogonadism and should not be prescribed without this diagnosis, according to the Mayo Clinic.

In guidelines issued in January 2020, the American College of Physicians recommended that men with age-related low testosterone, often referred to as “low T,” be prescribed only testosterone therapy if they have sexual dysfunction. For other low testosterone symptoms, it is not clear that taking testosterone will help, according to these guidelines.

The main goal of a ketogenic diet is to deprive the body of carbohydrates, which then forces the body to burn fat for energy. Restricting carbohydrates causes fat to break down in the liver, a process that produces ketones for use as fuel when sugar, a byproduct of carbohydrates, is not so readily available to demand energy. When the body is in this metabolic state, it is called ketosis.

According to Harvard, the potential benefits of a ketogenic diet may include less food cravings, reduced appetite, and fat loss instead of lean muscle mass as people lose excess pounds. Keto risks may include headaches, constipation or diarrhea, hunger, fatigue and irritability, as well as nutrient deficiencies.

A low-calorie ketological diet like the one used in the study has been previously associated with short-term weight loss and lowering blood sugar, less is known about the impact on testosterone and hormones. sexual, says Cignarelli. There is also a lack of research on the long-term effects of keto weight loss.

And a previous meta-analysis, published in December 2015 in the British Journal of Nutrition, looked at long-term data from more than 1,000 people who were randomly assigned to follow low-calorie or low-carb diets. This study found significantly greater weight loss in people who drastically reduced their carbs.

A study published in October 2018 in Nutrients found that obese men and women who started a ketogenic diet experienced significant weight loss and reductions in body fat and reported a reduction in food and alcohol cravings. increased physical activity and less daytime sleepiness. In this study, women, but not men, also reported an improvement in sexual function.

Limitations of the new study on Keto, weight and low T

The biggest drawback of the new study is that it has too few participants to draw broad conclusions about how a ketogenic diet can work for all obese men or all men with low testosterone levels, says Richard Kravitz, MD, MSPH, teacher. and co-chair of research in the Department of Internal Medicine at the University of California Davis Medical Group in Sacramento.

Although men experienced an increase in testosterone levels after four weeks on a keto diet, the magnitude of this change may not be large enough to be clinically significant, says Dr. Kravitz. Beyond that, the study did not explore whether the ketogenic diet resulted in any improvement in the symptoms often associated with low testosterone, such as low sexual desire or poor sleep, Kravitz adds.

And if men are concerned that low testosterone can wreak havoc on their sleep or sex life, that doesn’t mean they simply have to start a very low calorie ketological diet on their own.

“Very low-calorie diets can be dangerous and should be carried out under medical supervision,” warns Kravitz. “Ketogenic diets are probably safe for most people, but … it wouldn’t mean a very low calorie ketogenic diet would be safe.”

When it comes to Keto, the shorter the better

The best way to try a keto diet is for a very short period of time, as the men in the study did, says Uberto Pagotto, PhD, MD, professor of endocrinology and metabolism at the University of Bologna in Italy. Dr. Pagotto did not participate in the new study.

The results of the study suggest that the rapid and significant weight loss associated with the low-calorie ketological diet may have a strong impact on testosterone levels.

But there’s a problem: Men who already have testosterone levels in a normal, healthy range may not necessarily experience an increase in this hormone when they follow a low-calorie ketology diet, Pagotto says.

What the study does suggest, however, is that men with a specific type of low testosterone are known as functional hypogonadism, the type that is not caused by irreversible damage to the brain or testicles, but by obesity and others. potentially reversible health conditions. benefit from a stay on a low-calorie ketological diet, Pagotto notes.

In some cases, it can be difficult to identify the exact cause of low testosterone, says Pagotto.

“The real breakthrough in this study is this: the keto diet can be a very effective test to help identify functional hypogonadism,” says Pagotto.

The Enigma of the Ketogenic Diet: Friend or Enemy of Heart Health?